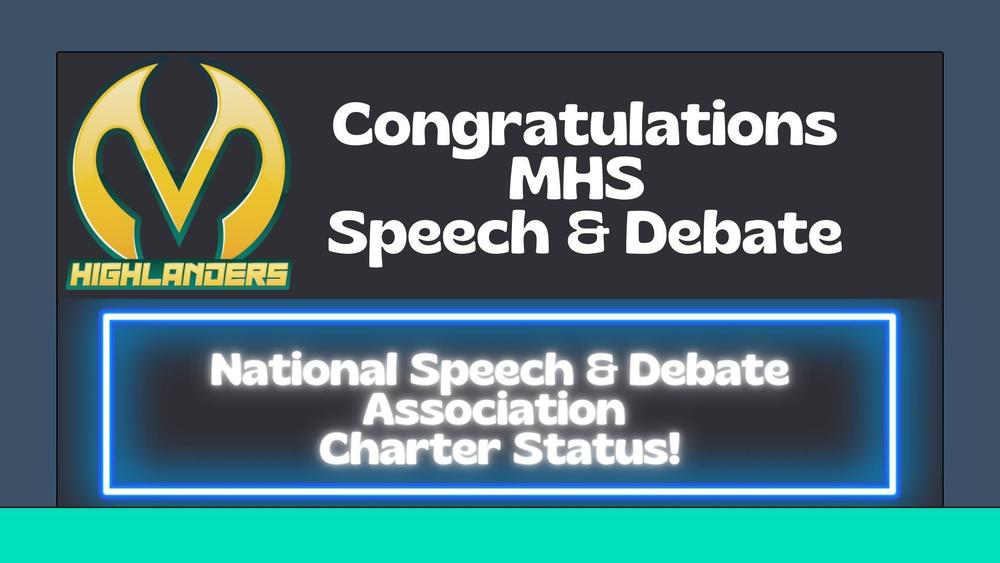 In addition, NSDA granted MHS the Keith West Memorial School Grant, a $5,000 grant that is only available to one school in the nation each year whose speech and debate team shows “strong potential,” according to the NSDA website.

“These are the benefits the family of Keith West wanted to ensure students can access,” Perez said. “Our team has been growing tremendously and consistently for years.”

“It costs an immense amount of money to take 14 students to a two-day tournament, feed them, drive them, house them, etc,” Perez said. “But, they develop unbreakable bonds and strengthen their skills as orators.”

Obtaining charter status was no small feat. After proving their success at the aforementioned tournament, the team had to go through many more steps, such as entering past NSDA points into a tracking system, obtaining recruits to stay above membership thresholds, and fighting against certain stigmas that come with the territory.

“They endure long hours of research, writing and oral defense,” Perez said. “It's sometimes a hard sell to get high school kids to write research papers for fun.”

MHS student and team captain for 2022, Sam Deuel, offered his thoughts on the benefits of speech and debate for those involved.

“Speech and Debate is a beautiful, useful outlet to teach worldliness and independence to students,” Deuel said. “Building these skills alongside a team, win or lose, gives me this sense of accomplishment and fulfillment. The confidence that accompanies each tournament is unbelievable.”

Building a speech and debate team is no easy task, but the successes and accolades that they have earned since the team’s inception have finally paid off.

“I know it strengthens every soul who participates, creating deep-thinking, empathetic and solution-oriented students and citizens,” Perez said.